Due to the ongoing concern for the COVID-19 virus, we are taking precautionary measures to ensure your safety as well as the safety of our staff. My-Pros is currently offering "VIRTUAL ESTIMATES" for roofing services via video and phone.

Click or Call Us Today to Schedule a Free Estimate!

The History of Asphalt Shingles in the United States 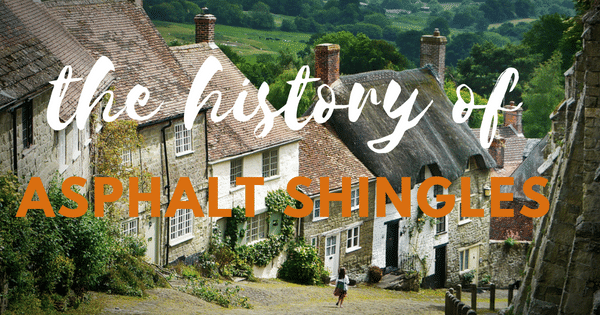 First used in 1901, asphalt shingles were invented by Henry M. Reynolds of Grand Rapids, Michigan. Through previous experiments with asphalt as a roofing material, the long rolls previously used were cut into strips. This method of cutting created the modern one-tab and multi-tab shingles we know today. By 1939, 11 million squares of shingles were being produced and in general use in many parts of America. Before the invention of the asphalt shingle, a popular roofing material were wood shingles. These wood shingles provided a major fire risk and the U.S. National Board of Fire Underwriters launched a campaign to eliminate the use of wood shingles. This campaign created a huge growth for asphalt shingles in the 1920s.

Though the modern asphalt shingle was invented in 1901, asphalt had been contemplated as a roofing material back in 1893. This material was called asphalt prepared roofing. The design was like that of asphalt roll roofing but didn’t have any surface granules. Slate granules were added to the surface of the roll in 1897, making the material more durable. There were many types of granules tested on this type of roofing material. Some include mica, oyster shells, slate, dolomite, fly-ash, salica, and clay.

The earliest shingles were all what would be considered as “organic shingles” today. They were based with felt, primarily composed of cotton rag. However, as cotton become more expensive in the 1920s, alternative materials started being used. Some of the alternative materials included wool, jute or malina, and wood pulp. There were 22 different types of experimental felts tried in 1926 by the Asphalt and Shingle Institute. Along with the National Bureau of Standards, there were no significant differences found in the performance of these materials.

The Rise of Fiberglass Shingles

The 1950sand 1960s proved to be two great decades in the improvement of asphalt shingles. In the 1950s the use of self-sealing and manually applied adhesives meant less wind damage to the new shingle roofs. Roofers began testing the use of ¾ inch staples, rather than the standard roofing nails. These tests concluded that though the staples could perform just as well as the nails, it took six staples to secure the shingles versus four nails.

In the 1960s, research concluded that asphalt shingles could be damaged by hail that was larger than 1.5 inches. Further research on storm and wind damage was conducted in 1990 by the Asphalt Roofing Manufacturers Association with the formation of the High Wind Task Force. Later, in 1996, three major groups formed to create an impact resistance classification system for roofing materials. Between members of the US property insurance industry, the Institute of Business and Home Safety, and the Underwriter’s Laboratory, the UL 2218 established a national standard for impact resistance. This meant that insurers could now offer discounted premiums for structures that had the highest impact classification.

Asphalt shingles continue to be the main roofing material used in the Midwest residential market. The shingle continues to evolve through manufacturing technology, raw material upgrades, and design innovations. However, the cost of asphalt shingles continues to rise with the demand for oil and other natural materials. My-Pros team predicts that by the end of 2018, a new asphalt roof will be comparable in price to a metal roof, a material loved but often overlooked due to the price.

My-Pros operates throughout the Northern Illinois and Southern Wisconsin region, in cities like Rockford, Machesney Park, Belvidere, and Beloit. Give us a call at 1-815-957-0770 or click here to schedule a free estimate!

Back to Previous Page
Back to News & Events